In the heart of black, a book that reveals the importance of this color in Japanese culture

Sully Editions offers an original and fascinating book: The Place of Black in Japanese Culture. Lucien X. Polastron, an expert in Chinese and Japanese writing, explores this color from the angle of ink and, of course, calligraphy, but not only: women’s teeth painted black for centuries, hair, clothes, bunraku puppets, ceramics, tattoos, house facades, food… Fascinating journey to the land of black!

Seven chapters allow the reader to walk around this color in historical and philosophical reflection. The presented knowledge is illustrated with beautiful photographs throughout the book, allowing visualization of the topics covered.

The book begins with ohaguro which indicates black colored teeth.

“Already some statuettes from the period known as “ancient tombs” (Kofun, 250-538) look decorated with this art, therefore archaic. Either way, ohaguro entered the customs of the aristocracy during the Heian era (794-1185): from the fourth rank of nobility, pubescent girls and boys have their small teeth painted black and their faces painted lead white, while their eyebrows are shaved and drawn in the middle of the forehead. , as told in the 11th century by Murasaki Shikibu, the author of Genji monogatari (The Tale of Genji) or, at the same time, Sei Shônagon.
The arbiter of elegance that is Sei Shônagon, establishing in his Bedside Notes the classification of “Things that beautify the heart,” elevates “Well-blackened teeth” to fifth place on his long list. Well blacked out means that the application was very precise, that it was well made. »

In this chapter, you will discover the art of black paint for teeth, but also long black hair and the contrast created with the whiteness of the face. Everything is illustrated with superb photos and pictures of Japanese women.

In the next chapter, the spectrum of Japanese colors is presented. Beginning in ancient times with four colors, red, black, white and blue, then developing from 603 when Prince Regent Shotoku formulates a strict color hierarchy with “twelve degrees of headdress”. It is also about the black daily costume of beginners of Japanese Buddhism, but also of high state dignitaries.

Which naturally leads us to the third chapter dedicated to the black color of fabrics. It is presented in intense, absolute black and it is fascinating. Brilliant black even in direct sunlight. A secret process. Deep beauty that disturbs! Photos of the workshops give an overview that tickles our curiosity, and we want to discover this unique black with our own eyes!

“Black is the favorite color of the Japanese, admits the dyer Arakawa Tohru, because it is not a color but an aesthetic ideal whose one function is to express self-denial in order to show respect for others. »

The puppeteers in black from the bunraku, about whom Marguerite Yourcenar spoke so well, are also mentioned:

The fourth chapter Common applications examines all aspects of black in art, craft, culture and everyday life in Japan: from the setoguro raku bowl to the tattoo, from the black facade of the house (with an impressive wood burning technique) to dark food (beans, sesame, etc.) to ink and calligraphic ink stone, which will be the topic of the fifth chapter. Black is one of the pillars of Japanese culture! 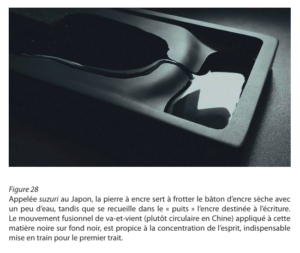 This chapter dedicated to the shower will delight those who want to know a little more about those sticks that calligraphers rub for a long time on their stone to create a shower in which to dip the brush. The ancient, archaic production is recorded step by step, and many photos taken in the workshop are simply sublime: the craftsman and his black hands, drying sticks hanging on ropes and these burning candle wicks, depositing a layer of soot that will be the first ingredient of ink!

Then there is only one step from the shower to the art of calligraphy (agreed) and you sumi-e (ink painting) subjects of the next chapter.

“In China or Japan, the old connoisseurs judged an artist according to a double criterion: he must have a shower, and if he has one, he must have a brush. If he has one and not the other, he is not a successful artist. “To have ink” means to dominate the substance to such an extent that its shades and tones are expressive, that it exudes spirituality. “To have a brush” means to have a structuring hand, to wield a tool with impeccable flexibility and firmness. Of course, the very rare mastery of the “single stroke of the brush”, visible in the lines of paint, is acquired through the practice of calligraphy. Scholar painting is calligraphy disguised as painting. »

On the pages we discover many masters of calligraphy, Buddhist monks, contemporary artists. Photographed calligraphy illustrating the subject makes it possible to understand the different styles and lines found on the paper. Two Western artists, Fabienne Verdier and André Marfaing, were even represented.

The last chapter takes on a spiritual and universal dimension. Starting with the shadow in Japanese houses (and from Praise the shadow Tanizaki) then floats towards zazen, meditation, emptiness… Because in the end black is also the ultimate emptiness (black hole, dark matter, dark energy), but also much more:

“Also the earthly pedestrian is invited to taste the calculations of science in motion as pure poetry.
That is why it will be useful for him to get closer to Japanese thought, whose brush revolves around the same holes, materials and energies. The hidden face of black reveals what it can be: a source of light. »

A book to travel, discover, think, see this color with new eyes!

Lucian X. Polastron: When I was a journalist traveling the world (now just a writer), I discovered Tokyo during a layover around 1980. I was already familiar with China and the Chinese, who had marked me first. The quality of silence in the city in the central district, around the Imperial Hotel: it seemed like Sunday! And the impression was confirmed in Shinjuku, where the audience glides by itself without aggressiveness. This is where my research began, to sink further and further away from the big cities, in search of all the infinitesimal details that make up the quality of Japanese life. So it’s the philosophy of nature and humility before things that I ended up identifying.

How did the idea for this book come about?

It flowed naturally with the ink, if I may say so. Specializing in the study of Chinese and Japanese writing tools, it seemed to me that the predominance of black in calligraphy and monochrome painting offered wonderful escapes for the imagination, especially when we crumbled black ink in a black inkwell.

And when Michel Pastoureau’s history of black was published in 2009, in which he announced that he would not deal with the Asian vision of this color, I felt called to do so for him, since the Far Eastern perspective on the subject seems to me more enriching than ours.

Did this black “grab” you on your first trip to Japan?

What catches the eye at first in Japan is quite colorful and refined. Rather, I would say that black is hidden in intimate, noble and secret actions, which I had to wash away one by one in order to achieve the impression of cohesion through the non-color that springs from it.

Have you been able to experiment with wearing the fabric in absolute black? If so, how did it make you feel? 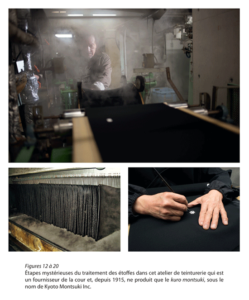 Yes, and I strongly felt that impression of wearing weightless armor and disappearing into the eyes of others. Later I found out that the stylist Yamamoto was saying almost the same thing: black protects you and doesn’t hurt anyone.

What is the place of black color in your daily life?

It’s mostly from childhood: a dark space scares as much as it attracts; therefore, my first favorite writers were Edgar Poe, Nathaniel Hawthorne, Bram Stoker, etc. That is, the genre that in the English domain is called “noir novel” (we prefer to say “gothic”), the taste of which I have always retained. And then if you want a little confidence, I feel the easiest in a black suit.

Journal du Japon thanks Lucien X. Polastron for his availability and answers.

Do not hesitate any longer, discover all aspects of black and its importance in Japanese daily life for centuries in this fascinating book!

The first book exchange was organized

Literature: “Arabic language of the future”, “Live fast”, “13 at the table!”… find out what are the best-selling books of the moment

a 32nd book fair in person